“Petar Stoyanov is an optimistic leader of a deeply pessimistic people.” 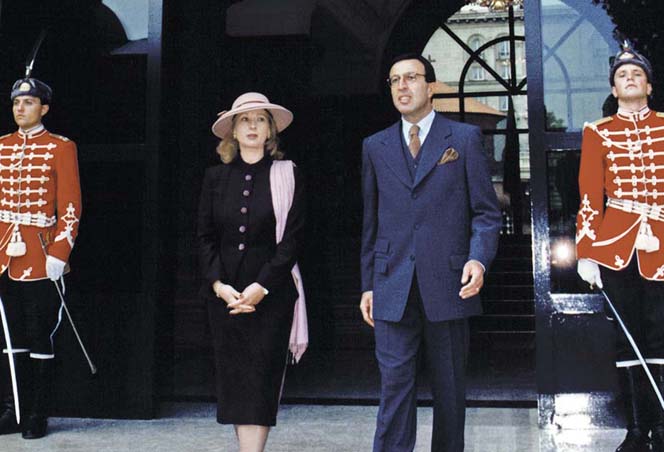 President Stoyanov and Mrs. Antonina Stoyanova in front of the main entrance of the Presidential Administration Office in 2 Dondukov Blvd. in Sofia.

Teddy Weyr, Associated Press, on the events of February 4, 1997.

Bulgaria’s new president, Petar Stoyanov, couldn’t appear more different from his predecessor. He is Western in his outlook and goals and has no time for hand-wringling or philosophizing. Bulgarians have placed their faith in the man who, they hope, will kill the double-headed dragon of former Communists and economic misery.

While his predecessor Zhelyu Zhelev – a former Communist turned dissident – railed ineffectually against the incompetence of successive governments, Stoyanov set a course of action even before taking office on Wednesday.

He outlined his policies, said he will not shy from difficult decisions and gathered experts and intellectuals from all walks of life to advise them.

By choosing Brussels – seat of the EU and NATO – for his first official trip abroad less than a week after taking office, he made his priorities clear.

“I know which way Bulgaria must go,” he told supporters who walked with him on the streets after a formal ceremony marking his inauguration. “We must mobilize all our forces to lay the foundations for Bulgaria’s full-scale integration in the EU and NATO.”

That will be an extremely difficult task.

First Stoyanov must break the deadlock between the ruling Socialist Party of former Communists – accused of worsening economic misery – and the democratic opposition over whether to hold early elections or allow the Socialists to continue governing.

Zhelev never managed to overcome the political polarization that has paralyzed Bulgaria for some seven years.

He took office in 1990 and won popular election in 1992 at a time when Bulgarians were waiting for a government to enact reforms like elsewhere in Eastern Europe. They never materialized in Bulgaria.

Now, the need to act is overwhelming, with inflation topping 300 percent last year, wages dipping to the equivalent of $15 and an acute shortage of funds to allow instalments of $ 1.5 billion due this year on a $10 billion foreign debt.

Failure to resolve the political crisis before Stoyanov goes to Brussels would be a colossal embarrassment and make a mockery of his bid to present Bulgaria as a serious partner in need of aid.

Even in his demeanor, Stoyanov conveys a substantially different picture than Zhelev, a diminutive man with perpetually mussed grey hair who is deliberative and still dressed in the drab style of the past.

In contrast, Stoyanov is energetic, statesman-like and Western in his carriage and dress. While Zhelev speaks some French, the language of literature, Stoyanov speaks fluent German, the language of business. Zhelev became increasingly aloof from the people and in the end lost their respect because he was so hesitant.

For him, upholding moral values was primary. He refused in his final week to give the Socialists a mandate to form a new government after luckless Premier Zhan Videnov resigned.
Stoyanov, a former lawyer, now will have to use his negotiating skills to seek consensus among the political rivals and the people without losing their trust.

That is a tall order for a president who has few official powers. If he fails, Stoyanov could find himself as discredited as all others in government.

Already, Stoyanov has sought to win people’s confidence by being outspoken and available. And expectations are high.

“We need to approach Europe,” said Elena Ivanova, a pensioner. “I’m convinced he can do it. Together with his people, he’ll succeed.” 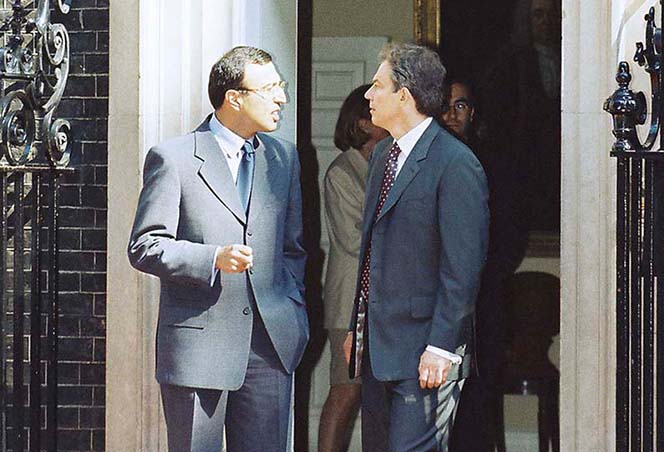 It was impossible to ignore the rights of the people – there are occasions when even former communists surrender… The main figure in this unexpected development is President Petar Stoyanov. 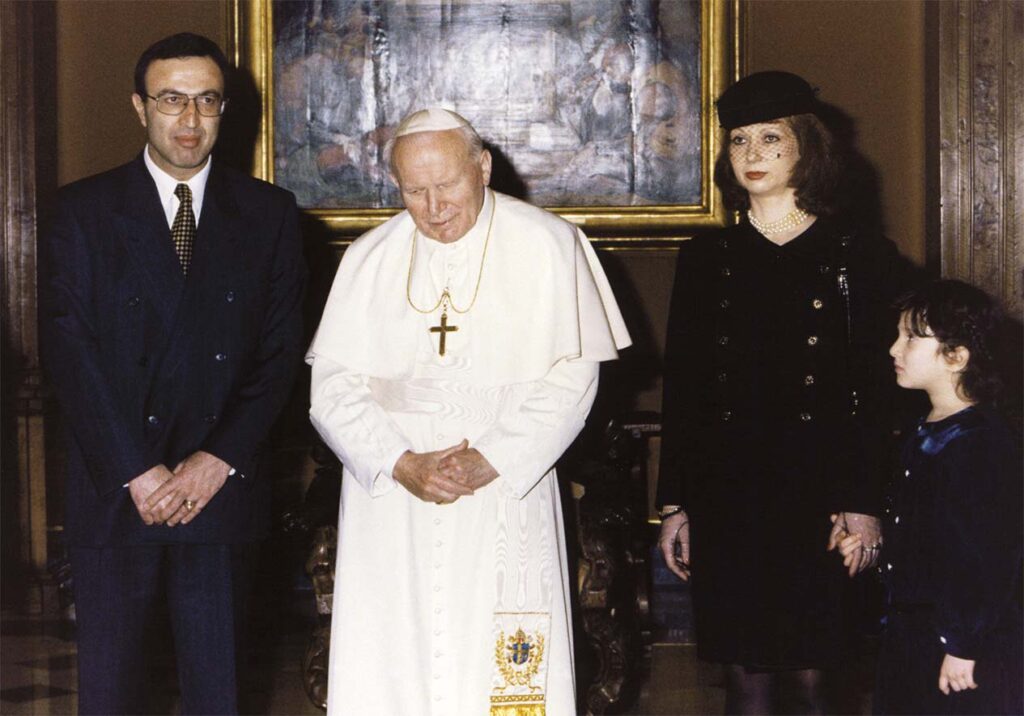 Bulgarians see President Petar Stoyanov as the saviour from the crisis because they live in the only country of the former socialist camp that has failed to manage the change.

With Helmut Kohl –
Chancellor of the Federal
Republic of Germany.

The first hundred days of the presidency, completed yesterday, were without exaggeration the strongest days of governance Bulgaria has seen since the fall of the Berlin Wall. 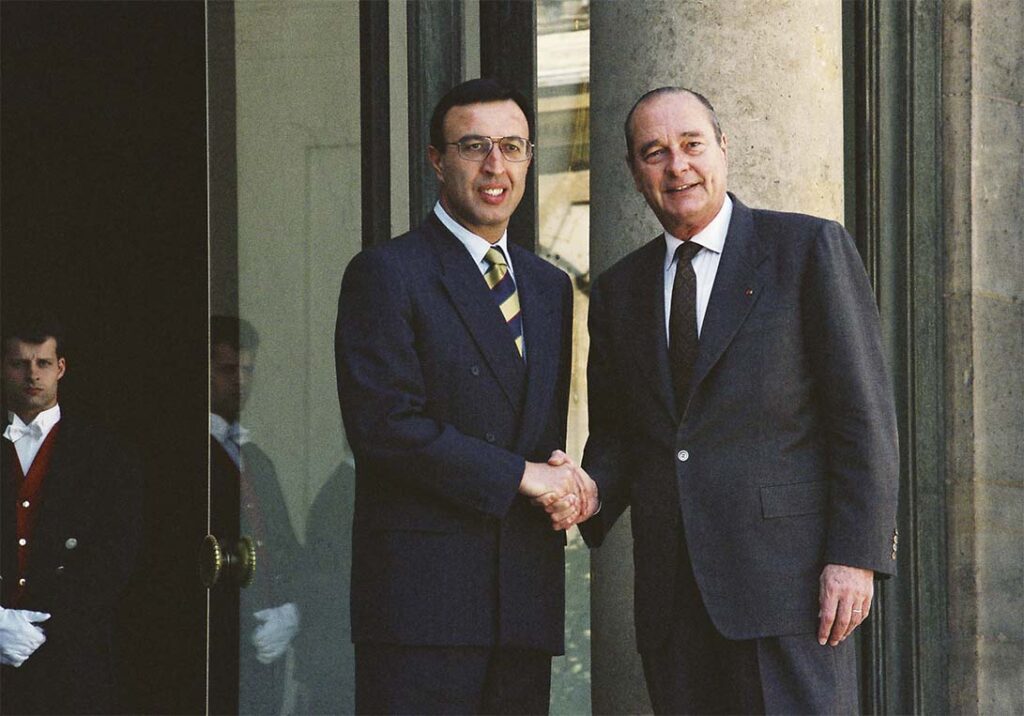 With French President
Jacques Chirac at the
Elysee Palace, Paris.

[…] Bulgaria is lucky to have а president, Petar Stoyanov, who, though he has less power over most things than his prime minister, has managed bу dint of personality and exhortation to make Bulgarians feel better about themselves, which is no small achievement in а part of the world where there has been little cause for merriment since communism collapsed а decade ago.

[…] “Му most intimate fear”, says Mr. Stoyanov with passion, “is corruption. If our reforms are accompanied Ьу corruption, democracy itself will bе threatened.” Не likens himself to а gladiator fighting against the forces of darkness and dishonesty. Spartacus, Bulgarians like to tell you, was а Bulgarian. 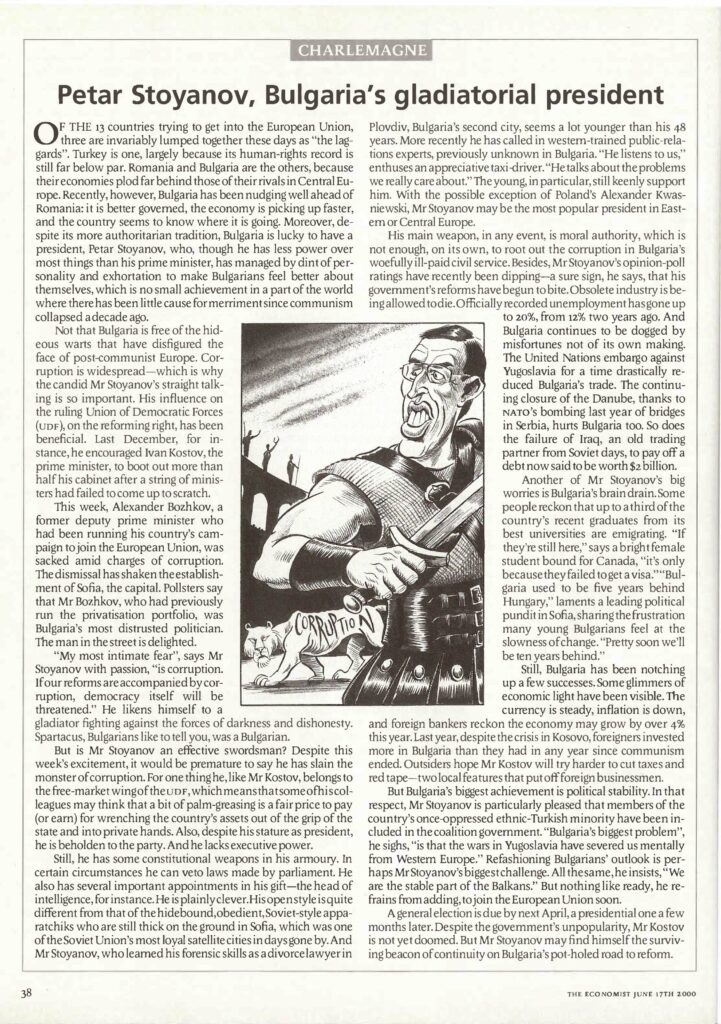 […] Не is plainly clever. His open style is quite different from that of the hidebound, obedient, Soviet-style apparatchiks who are still thick on the ground in Sofia…

[…] With the possible exception of Poland’s Alexander Kwasniewski, Mr Stoyanov may bе the most popular president in Eastem or Central Europe.

His main weapon, in any event, is moral authority…

Letter from Bill Clinton to Petar Stoyanov on the occasion of their joint work in the Clinton Global Initiative, October 15, 2009

I want to express my profound gratitude for your support of the Clinton Global lnitiative (CGI). The participation of esteemed world leaders like you enhances the impact the Annual Meeting has on our communities, and I’m honored that you took time out of your schedule to attend.

[…] I was inspired by your ideas, your initiative, and, most importantly, you hope. Our work is fueled by an unfaltering faith in the ability to influence progress, and I appreciate the role you play in advancing this common mission. 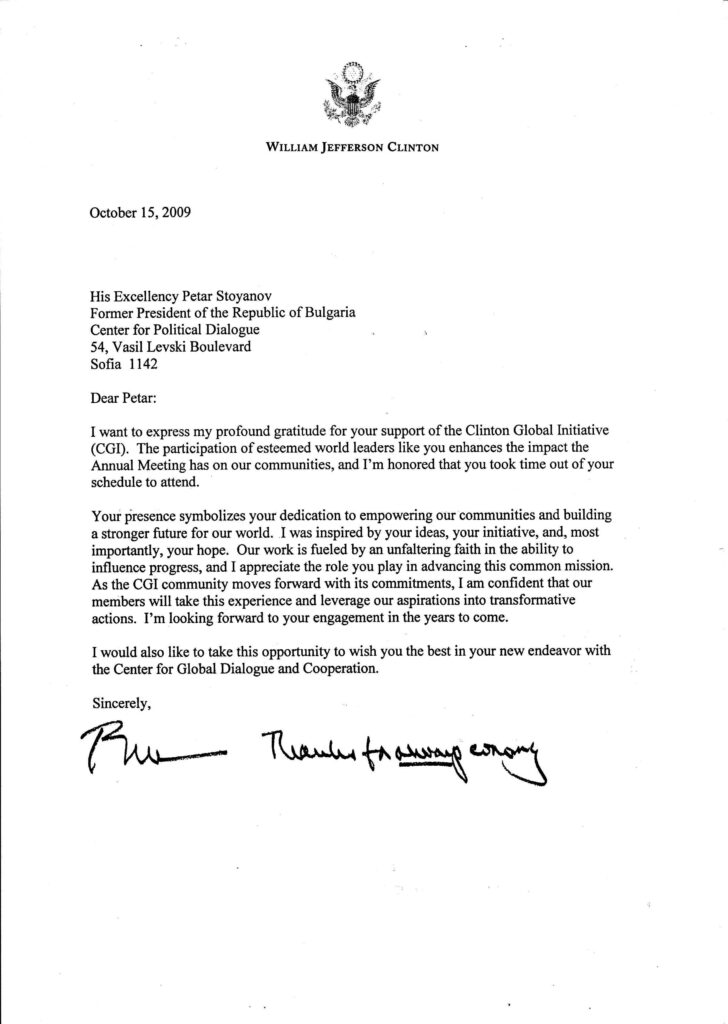 With US President Bill
Clinton in Sofia.

Dr.Lyubomir Kanov, The truth about the road to the horizons of freedom

Preface to the book by Yordan Vasilev, “This happened before my eyes”, book 1

Dr. Lyubomir Kanov is a psychiatrist, writer and a former political prisoner. He emigrated to the United States in 1984.

This book was written with the undoubted passionate ambition to faithfully record important events in our recent history before they are forgotten or replaced by professional lies, which could turn them into something distant and detached for younger generations, making them incomprehensible – a time of chaos and contradictory historical claims.

Yordan Vassilev’s experience, as told, is honest and factually reliable. These are events that are either being silenced or retold in a distorted and partisan way, without the awareness of the crucial importance of the behavior of key political figures from that time; figures who would determine the country’s geopolitical destiny for its long term future.

One of the most significant historical figures of the last two decades is without a doubt Peter Stoyanov – the first statesman of the transition period, who actually instituted the new civilizational choice for Bulgaria. He is, in fact, the first real president of Bulgaria, elected by free people in the hope of the establishment of a true democratic state. It is therefore no coincidence that he has been recognized by public opinion as the most popular politician of the transition. In my opinion, he is well deserving of this accolade due to his unblemished reputation as an honest politician who never put personal interest above the public good. He is one of the few politicians with an unwavering sense of respect for the victims of communism and their place in history.

This book is an important contribution to our ongoing duty to remember our past and to know the importance of our historical destiny, in which President Petar Stoyanov played such a prominent role. I believe that it will be read and will remain as a testimony for generations of Bulgarian Europeans who will one day want to understand the beginnings of our journey from the dungeons of totalitarian darkness to the horizons of Freedom. In following this path, we must pay our respect to the author Yordan Vassilev and his service to telling the truth. 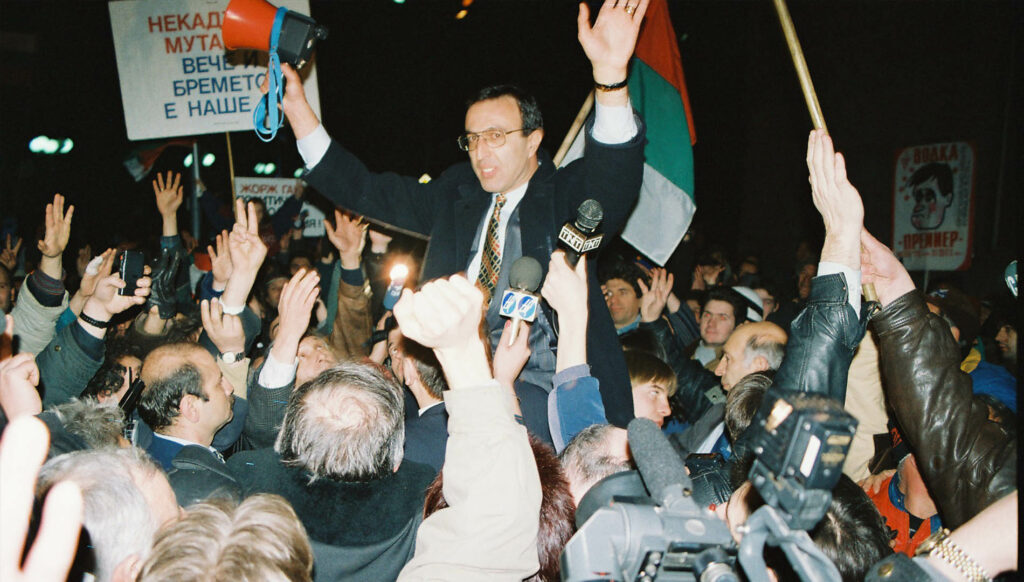 Following the resolution of the political
crisis on 4 February 1997.